Is there any such thing as a deer resistant plant? Adding privacy at the cottage. 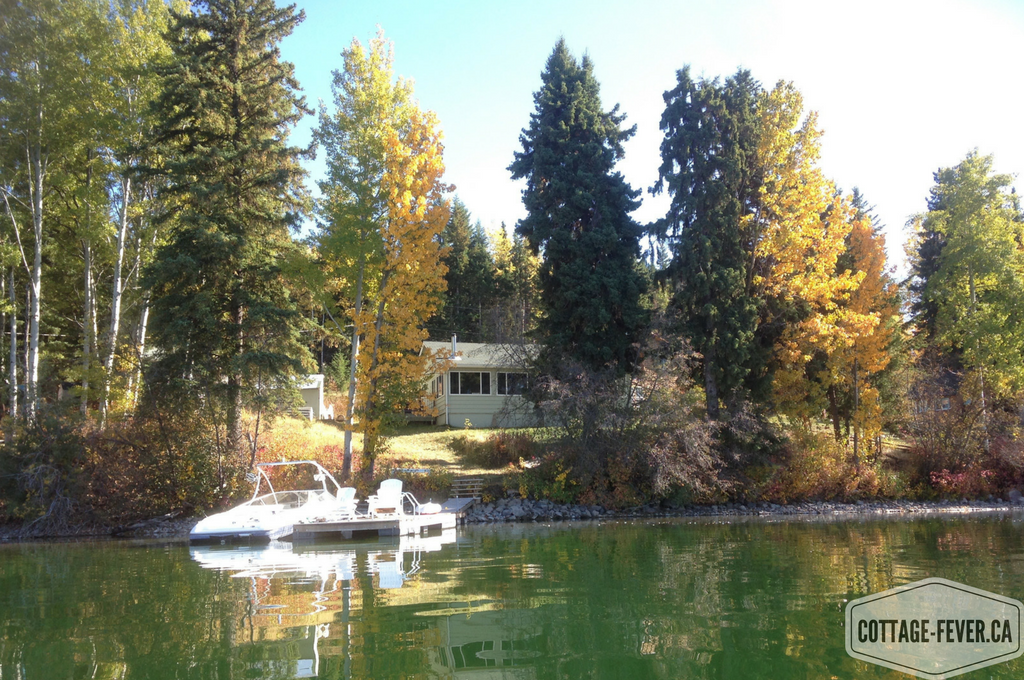 So we bought this new cottage (new to us) and it has a fantastic location. One hundred and eighty degree view of the lake out the front windows, facing west, no weeds, crystal clear water and no cottages facing us.

The one and only downside is that the neighbours on one side are extremely close.  But in actual fact, they’re not that close, it’s just that there is no fence nor trees in between which equals no privacy. The two properties were previously owned by a brother and sister so they purposely left it open with nothing to separate the two cottages.  The bright side is that the neighbour’s cottage is set behind ours which means that they can’t see us when we’re in front of our cottage, on the deck or on the dock and we can’t see them when we look out towards the water.  We only have a small kitchen window and two bedroom windows that face out their way so it’s not like they’re impeding our view of the lake.  And fortunately, they are fantastic neighbours and I’m sure we’re going to end up as great friends.  But that doesn’t mean we want to see everything that they’re doing and I’m sure they feel the same way about us.  In fact, they are so considerate that they often keep their blinds closed on the side of the house that faces our property as they don’t want us to feel that that they’re invading our privacy.  And we’ve installed blinds as well.

We also needed privacy from the road.  The previous owners were very concerned about break ins, with a security system and sensors throughout the cottage (it’s 1000 square feet).  In fact, you can only unlock the exterior doors from the inside with a key rather than turn a knob.  They made sure there were no trees that would block the view of the cottage from the road and subsequently someone potentially breaking in.  We’re not so concerned about that.  It could happen but we don’t keep anything of value at the cottage.  And there is insurance for that.  Privacy is far more important to us than the remote chance that someone will break in.

I thought that fast growing shrubs would be the answer to both of our issues.  So with some advice from my sister-in-law who is a horticulturalist and also lives in deer country, I bought some plants.  We settled on Nine Barks (Physocarpus).  They can grow six to nine feet tall and six to eight feet wide, can survive in Zone 3 and grow quickly. Also drought tolerant, they should survive if there is no rain between my visits to the cottage. And apparently they are easy to grow which is essential in a short growing season and with my limited skill.  Best yet, they are deer “resistant.” At nine feet tall, they won’t impede my neighbour’s view over our house and out to the lake but will impede our view of looking up at their cottage.

I like that nine barks lose their leaves in the fall as with the sun being lower, it will allow more light into the cottage and the neighbours are unlikely to be up in the winter so privacy at that time of year isn’t such an issue. The plant’s peeling bark also provides some winter interest against the snow.  As we won’t be outside then as much, I wasn’t so concerned about the road privacy either. And if someone is going to break in, it would most likely be in the winter when fewer witnesses are around so the house won’t be screened at that time of year. Evergreens tend to grow quite tall which would then block the neighbour’s view and they’re dangerous if topped and will restrict light in the winter so I ruled them out as an option.

Always trying to support the local economy, I went to this lovely nursery that is in the area (which means within a 45 minute drive).  They had a good supply of healthy ninebarks at a reasonable price so I picked some up.  With the help of visiting brothers, I was able to get them planted in no time.  They looked a bit sad as they’re so small but I can visualize what they will look like one day when they’ve grown tall and filled in together to create a wall of privacy so I have faith I made the right choice.  The key to keeping them alive was to give them lots and lots of water so the next morning I went out with the hose.  Those frickin deer had already got their chompers on them.  I could see each stem had been bitten.  Really???  The plants couldn’t be left alone even for a day???

Over the course of the next few days, leaves were disappearing off the plants at an alarming rate.  I didn’t have enough plants to fill in the area so I headed back to the nursery to get more.  When I explained my deer issue to the owner, his response was reassuring, “Ninebark love to be pruned”.  So the deer had done me a favour? I guess that’s the glass is half full version.  Sigh.

Well that was in the fall.  We’ve made our first visit back and even though I had to wear my reading glasses to detect them, I do see buds on the ninebarks so it looks like they survived the winter which had temperatures down to -35 C.  Now if only they can survive the deer this spring.  Fingers crossed as I don’t really have a plan B.  Yet.