How to avoid our mistakes opening the cottage 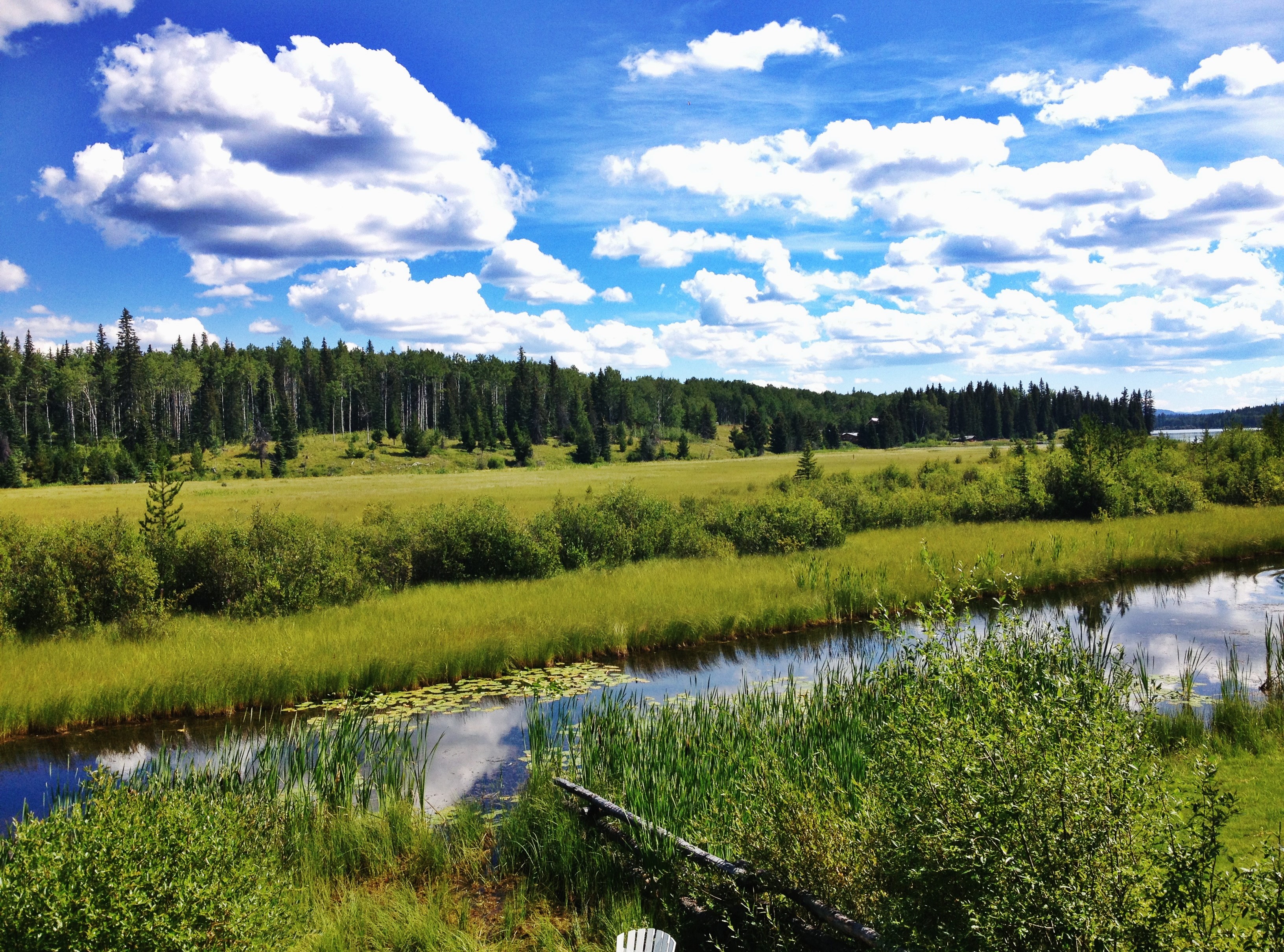 I remember the first time that we opened up our cottage as newbies.  We were so excited to arrive for the May Long Weekend and check out the property in the spring.  Would there be wild flowers?  How about fawns and other little baby wildlife? We couldn’t wait to arrive.

But what greeted us was the unexpected.  The jars we’d left in the fridge over the winter had burst.  We were idiots!  We had thought that by leaving the fridge plugged in, the temperature would be consistent in the fridge and our stuff wouldn’t freeze.  Wrong!  Classic mistake.  What a mess.  And smell. And now we had a dead fridge as I guess it just couldn’t keep up and packed it in.  Craig’s List here we come.

Just because it’s spring on the coast…

I was expecting wild flowers, not everything to still be brown.  Our home is on the coast and so things had been in bloom for months.  We’d been mowing our lawn since March at home.  Our cottage was on a canal off the lake.  It had risen significantly and our fire pit was under water.  Note to self – move the fire pit about the high water mark. The cool thing about the canal at that time of year was the fish – large fish were swimming in the canal which at other times of the year is very muddy and marshy.

Lesson learned: Move everything above the high water mark in the fall

We’d watch the ice come off the lake through a webcam.  Some great person on our lake had generously set up a webcam on their property and shared it with the world so we could be at the lake vicariously throughout the winter.  That first May Long Weekend, we jumped in the boat to go out on the lake and explore.  We found a bay that still had broken up ice in it.  The sound of that ice tinkling in the waves was just an incredible experience for us.  We circled one of the islands in the lake and discovered that a Moose had had her calf on the tiny island!  It was so cool to see.  That island was always referred to in the future as Moose Island.

Lesson learned: You likely won’t be swimming on the May Long Weekend unless you’re one of those people who enjoy the Polar Bear Swim

The snow pack can affect your septic field

We bought our current lakeside cottage two summers ago, in 2016.  Last year, we blew out the pipes after our visit at New Year’s and didn’t go up again until late April.  This year, we kept the heat on over the winter and had it rented periodically.  The snowpack this winter was incredible.  And then, all of a sudden, it heated up and all that snow melted.  The ground was so saturated that our septic couldn’t drain into the field.  In fact, we had to have it pumped out twice in the course of two weeks.  We couldn’t have guests there and risk the water from the cottage having no where to go.

Lesson learned: Don’t rent out cottage in spring unless your guests are game to use an outhouse

You’d think over time that we wouldn’t continue to make stupid mistakes.  Not so my friend. About five years later we finally had indoor plumbing. Now I am a saint for putting up with an outhouse for five years but that’s how long it took to find a contractor willing to take on our small reno. Our area was experiencing a huge building boom and no one wanted to take on small projects when they could be building an entire cabin.

We arrived at the cottage and flipped all the breakers on the electrical panel that we had turned off previously when we left in the fall.  Breakers for, say, the hot water tank.  Then we primed the well and turned the pressure tank on.  Whew, no burst pipes.  That was a relief as we weren’t confident that we had properly blown out the pipes as it was our first time. We waited a couple of hours for the tank to heat up.  Hmm. Still no hot water.  On to the Great Google to figure out what might be the issue.  Oh.  You’re supposed to wait for the tank to fill and then flip the breaker – the opposite of what we had done.  We’d burned out the element.

We are very fortunate where our cottage was located as we have a little service centre a 10 minute drive away.  It’s kind of random as it has a general store/gas station, a pub, a gift shop which also has the best deal on ice cream and a RONA.  In the middle of nowhere.  And it’s a good thing too as sometimes we’re at the RONA twice in one day.  In any event, off to the RONA I went, taking our hot water tank element with me as an example.  When I explained to the clerk what I needed she said, “Funny.  We sell more of these on this May Long Weekend than any other time of the year.”  Classic rookie mistake.  Sounds like I had good company though.

Lesson learned: Always have a spare hot water tank element as you know you’ll repeat the same mistake.  I sure have.

Our kids have slept up in the loft the eleven years that we owned this cottage.  They’d gone from being able to stand up in it to practically crawling.  But they’ve never complained.  Except in the years that we’ve had visitors.  Little mice turds everywhere.  Time for me to suit up practically in a hazmat suit and vacuum. It’s really important to wear a mask when dealing with mouse droppings as mice can carry the Hantivirus Pulmonary Syndrome and it can be breathed in when it becomes air born through sweeping and vacuuming. After the first year it happened I got smarter and bagged up all the bedding, laid traps and covered the mattresses with tin foil.  Seemed to deter them.  Didn’t help that the boys were always eating sunflower seeds up there (a cottage tradition as they never ate them at home).

Mice weren’t our only intruders.  We had a very cheeky squirrel, who we named Rocky, set up residence inside the roof.  We could hear him in there at night and he would go in and out during the day, right in front of our eyes.  And he’d have the cheek to sit there basically yelling at us to get out of his house.  After all, he’d been the only resident for the past six months.  Lots of steel wool later, we’d plugged up all his entry points.  Rocky was very unhappy with us and he didn’t hesitate to let it show.  I guess we got lucky with only Rocky and the mice.  At my brother’s cottage down the road, they had marmots build tunnels under their place.  Each evening my brother would block off the tunnel with a huge rock and by morning the marmots had moved the rock aside.  Are you kidding me? Were these marmots on steroids?  They were eventually convinced to move out.

Lesson learned: Mice don’t seem to like the feel and sound of tin foil

What we saw on the game cam

One of our great excitements when we first arrive in the spring is to check the game cam.  We’ve set this up on what looks to be a game trail so it’s always fun to see what animals we might have “caught”.  You never know what you’re going to capture.  When we rented out the cottage on AirBnB, we happened to catch a guest answering the call of nature if you get my drift.  On another occasion, we caught a woodpecker.  Pecking out the friggin lens on the game camera.  Still works though!  Another time we had what looked to be a cougar.  WOW!  COOL!  On closer inspection though, I’m not sure if it might just be someone’s cat.  Take a look for yourself:

Before the advent of our indoor plumbing, we had been warned by a neighbour that a tree had fallen, right in front of our outhouse blocking the door.  Fortunately with the forewarning we knew to pack the chain saw and made sure this was the first job that was done.  Hey, it’s a long drive from the city.  The outhouse was put to use as soon as we arrived.

But that wasn’t the only time a tree fell.  In our area, we are plagued by the Mountain Pine Beetle which killed all the pines on our property.  Our first year alone we had 16 trees felled which were in dangerous positions close to structures.  We went on to have another 16 removed over time.  So what REALLY annoyed us is when a healthy tree fell on the cottage.  Thankfully the only damage was a dent to the eavestrough but because of the position of the tree, it ended up being an $2000 job to remove it. Thankfully our insurance covered the cost.  More firewood.

Lesson learned: Pack the chain saw where it is most accessible as it might be the first thing you need to use

The cottage has accumulated months of dust so throw open the windows, put on some dance tunes and start cleaning!  Bring out the deck furniture once you’re done and reward yourself with a brewskie on the deck or dock. 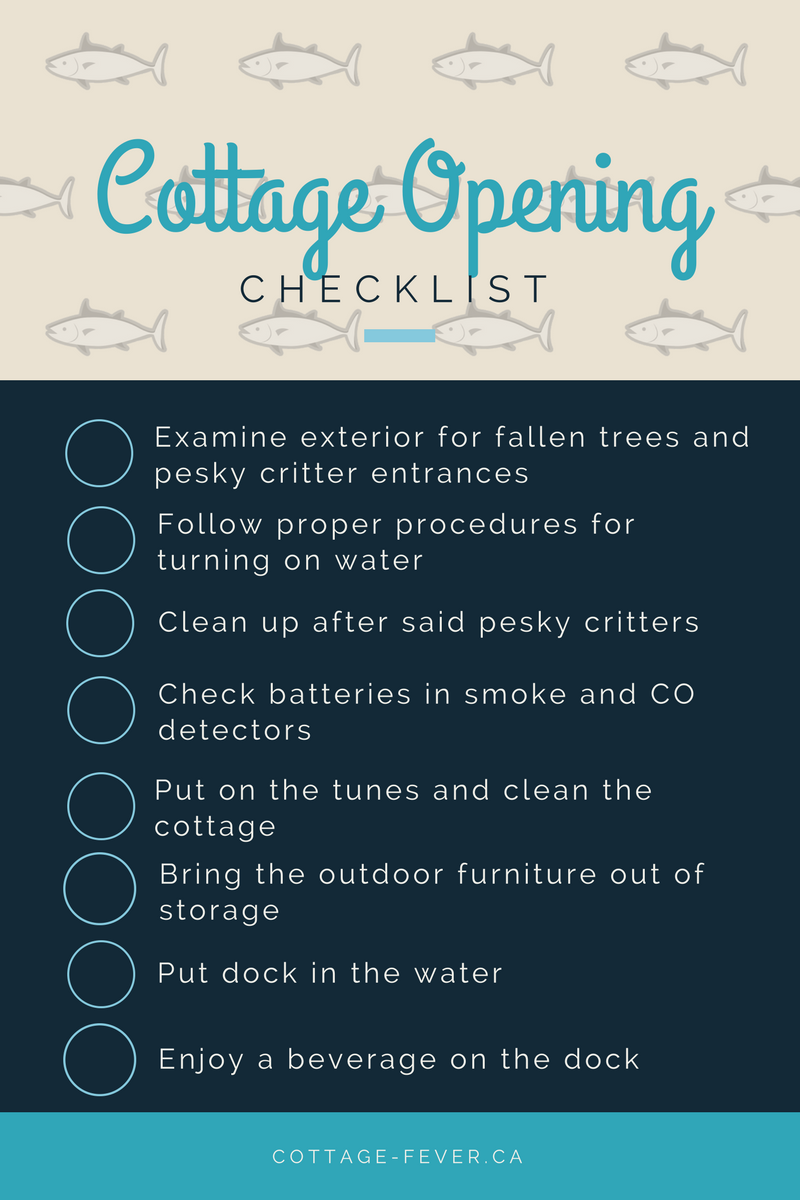 Filed Under: Opening up the cottage