In the first year of cottage ownership, one of my brothers suggested that we all head up for the week leading up to New Year’s.  I thought he was crazy as, at the time, it was an unwinterized, uninsulated plywood cabin and for the first few years, no indoor plumbing.  He assured me that with all our bodies in that small space we’d be plenty warm, especially with all the winter cottage activities that we had planned. Since that first year, it has become an annual, not to be missed, tradition.

The toboggan run usually includes at least one death defying hairpin turn to avoid a huge rock or a corner of the cottage and a massive jump.  And then the boys like to add to the danger by icing it overnight to make it faster.  Turns out this is not so good when you sneak in the first run of the day, not knowing it’s been iced overnight, ending up in a crippled heap at the bottom of the run.

At the hospital they told me there was “some compression” in my back.  My doctor phrased it as, “I see you broke your back”.  In reality I cracked a vertebrae so my tobogganing days are over.  But telling people I “broke my back” gets a much better reaction than “compression fracture”.

Of course there is always skating on the lake. Much care and attention goes into the clearing of the ice.  We lucked out last year and had that amazing ice that only happens when the temperature drops quickly and there is no snow. I mean you could look through it and see the rocks on the bottom of the lake.  Cool!

I always freak out over the boom of the ice cracking.  The first few times it happens I run for shore.  The ice is two feet thick so intellectually I know I’m not going to fall in but still, it’s extremely unnerving.  We always measure the thickness by drilling a hole through the ice with an auger (which makes a handy Christmas Gift for a cottager). 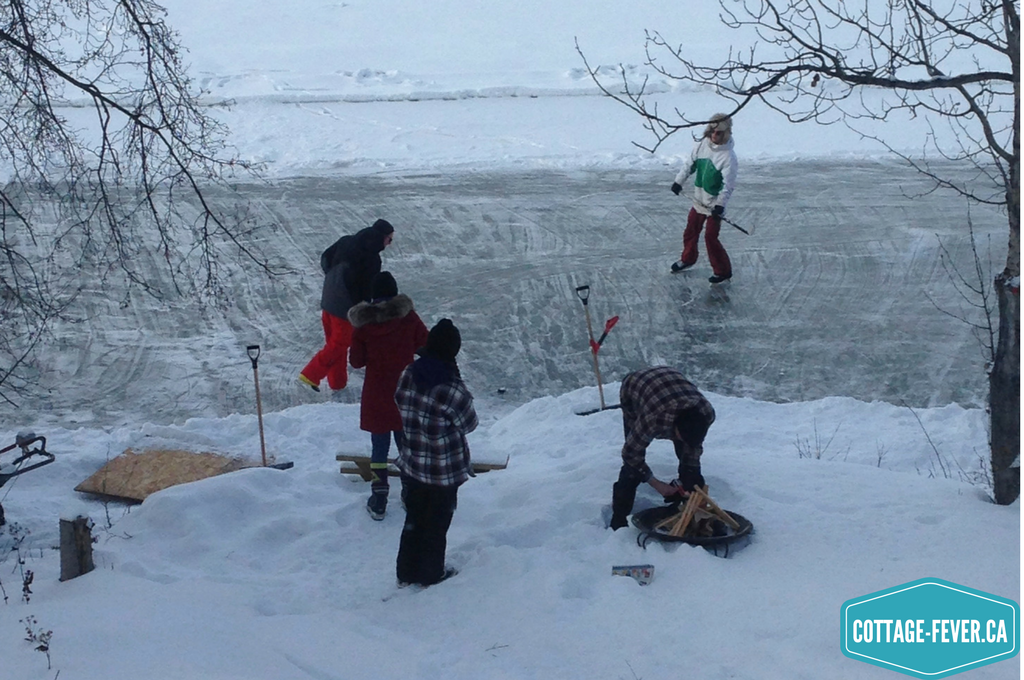 The flooding of the ice is a whole other ballgame. Steve will happily spend hours with a pump and fire house trying to create the ideal rink conditions.  There have been years when no one was actually allowed on to the ice until it was perfect and by then it was time to go back home.  What?!? 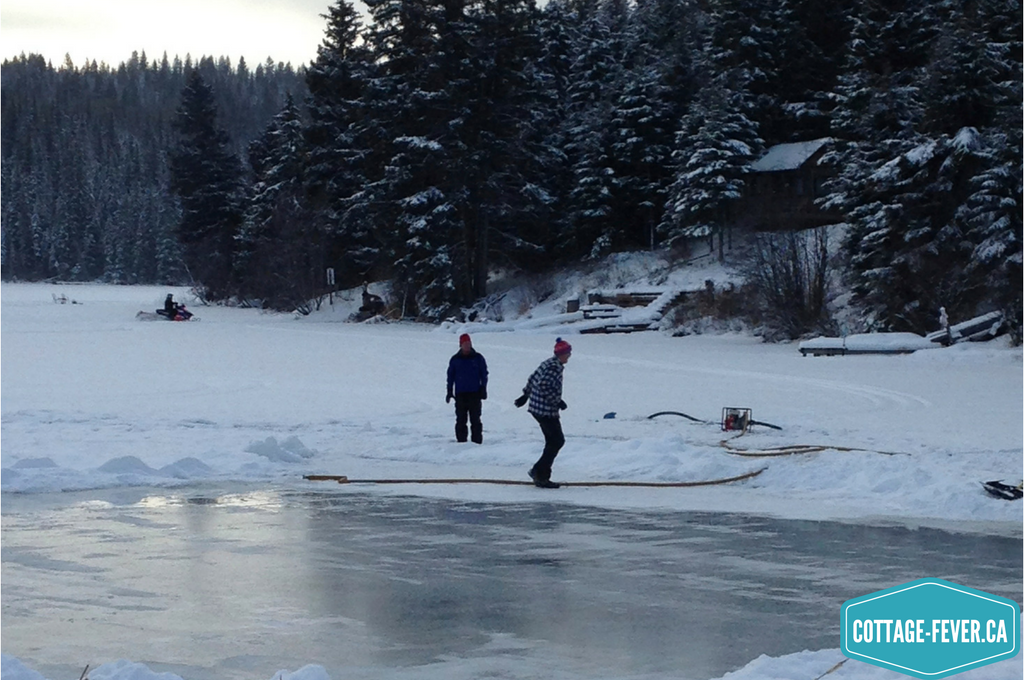 A warm fire down by the rink is essential for warming up cold skaters.  Even at -20, a campfire will warm up one side of your body quite nicely.  Remember to keep rotating though like you’re one of those chickens on the rotisserie at Safeway.  And if you step even one foot away – oh man that’s cold. And you’ll be drinking beer slushies.  If you build the fire right in the snow, it’s cool to watch as it slowly sinks down and ice crystals form around the sides.

And now that our kids and their cousins are all in their early twenties, a campfire would not be the same without Karaoke!  Who could have guessed that they would know all the words to John Denver’s, “Take me home, country roads”? 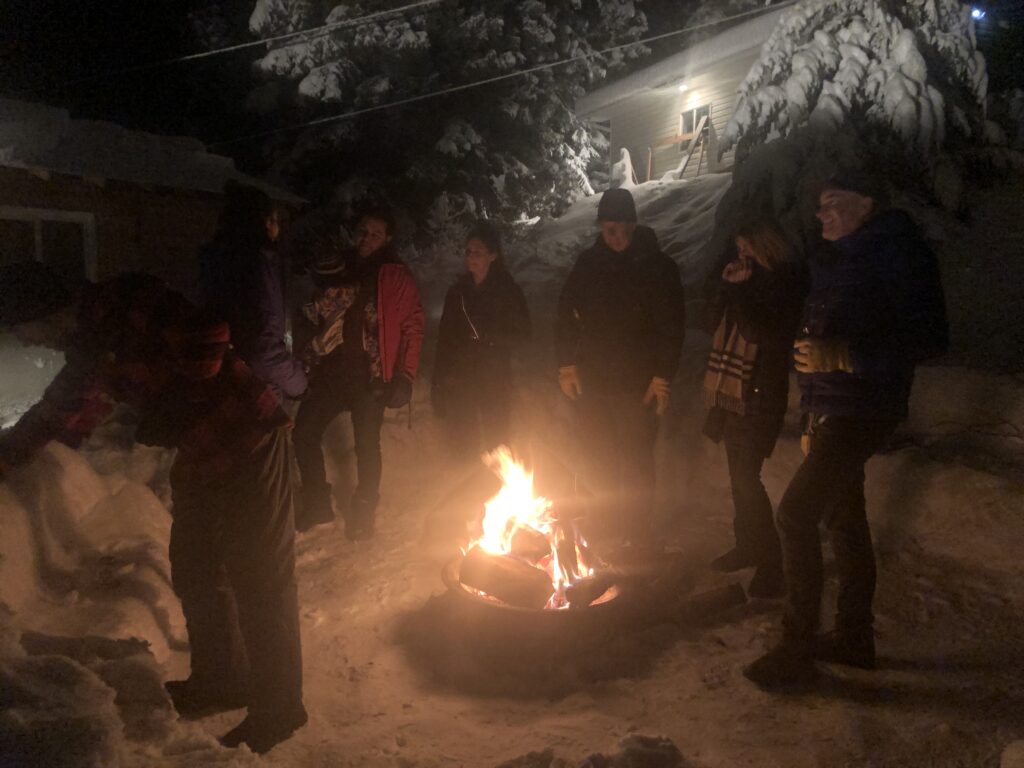 Building a Quinzhee – not recommended

My youngest son decided to try his hand at building a Quinzhee  and sleep in it.  Great if you’re lost in the woods and have no alternative as it will keep you from freezing to death but very nerve racking for a mother otherwise as there is real danger of it collapsing and the person inside suffocating.

He shovelled all the snow off the deck and onto the ground below into a huge pile and then let it sit overnight.  He stuck sticks into it to indicate the appropriate thickness of the roof so that when he hollowed it out, he wouldn’t go too far and have it collapse.  He also used sticks to open up air holes.  Once hollowed, he laid a mattress on the ground and slept in it all night in freezing temperatures. I think at one point he got paranoid that an animal might join him and arranged his boots to block the entrance.  I’m not sure who got less sleep – him or me as I kept getting up all night long to check on him.

And what winter visit to the cottage would be complete without the tradition of the pipes freezing?  That’s why you always keep the outhouse my friends, even long after you install indoor plumbing.  No one relishes a trip to the outhouse at -25 but we learned a trick.  We cut a toilet seat out of a sheet of styrofoam and it instantly warms to your body temperature the moment you sit on it.

In these situations, you really have to drink strategically.  No beer after dinner, switch to wine so you don’t have to make any middle of the night visits.  Those are the worst!

Snowshoeing gives you the licence to discover places that you can’t reach in the summer.  Traversing a frozen marsh to explore the hill on the other side, following animal tracks to discover where a moose bedded down for the night or crossing the lake to investigate an island that you’ve never been able to pull the boat up to, can all be done over a frozen landscape.

Star Gazing and the Northern Lights

With the short days, it’s fun to go for a “shoe” at night and enjoy the stars and if you’re really lucky, the aurora. There are times on a clear night when the moon is so bright that you don’t even need a headlamp.   Helps fill the time counting down to midnight on New Year’s Eve as well! 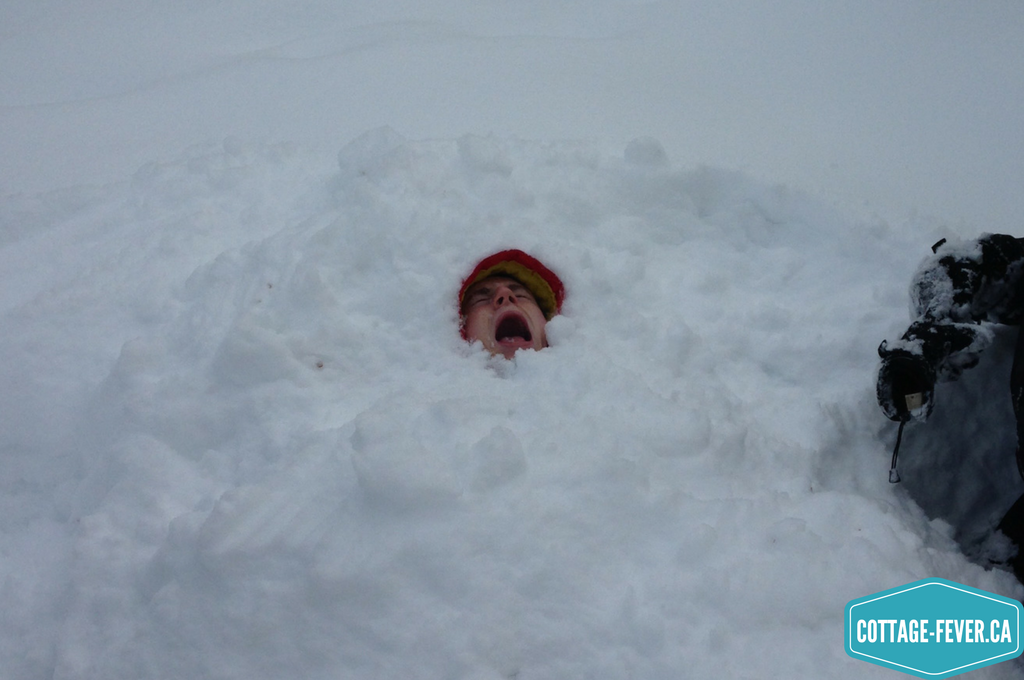 The little cousins love nothing more than to bury the older “crazy” cousins alive in the snow.  No one has sustained frost bite.  Yet.

While we’re out making so much noise on the lake or by the fire, you’d think that we’d drive all the wildlife away.  But based on the fresh tracks every morning, our cottage is on a wild life commuter run.

We’ve discovered where a moose bedded down for the night based on the large amount of compressed snow and where it relieved itself in the morning.  A spot of blood in the snow along with wing prints identifies where an owl captured a mouse. There is a fox who loves to explore around our cottage and we often see his prints on our deck in the morning.  What seem like mysterious holes in the ice are actually air holes for otters and we can see where they have skidded and slid across the lake only to disappear down a hole.  That sudden flutter of wings as we’re snowshoeing is another grouse that we’ve disturbed as we’ve gotten too close for comfort.

Why is it that the night before and after New Year’s Eve, I have no trouble staying up until 1AM but can’t keep my eyes open at 10PM on the big night?  “Guess the resolution” helps keep me awake and lively.  Everyone writes down their resolutions and throws them into a bag.  Then they’re drawn out one by one and everyone has to guess who wrote it.  Think you know your family members?  Well think again.

Have you ever witnessed a game of spoons?  The cousins all huddle around the table to play this game.  I don’t understand how it works and I don’t want to as it’s their thing.  It’s not meant to be a violent game but somehow or other, blood always seems to be drawn in the great frenzy of grabbing spoons and there is sometimes a wrestling match. They have an absolute riot playing it and it’s so fun to hear them laughing their guts out.  And so incredible that they haven’t outgrown it in their twenties.  Probably because they’ve turned it into a drinking game.

I made the mistake of buying our boys, “Cards Against Humanity”.  Now, I’m no prude but this game had me blushing.  I have to admit that I snuck some of the more offensive cards out of the deck and hid them.  And it’s a bit uncomfortable to play with certain members of the family.  Kind of like watching Shameless with one of your adult kids.  You’re both squirming with awkwardness.  But otherwise, tons of fun.

No cabin or cottage library would be complete without a set of Vinyl Cafe Diaries books. This is Canadiana at its best. I was so sad when the author, Stuart McLean, passed away. Hard to imagine that there won’t be any more Dave and Morley stories.   The humour and easy reading of these short stories are ideal when you need something light and there is so much going on that your attention span is short.  Suited to putting down to join a game and then pick up again when things quiet down.

Last winter, it got down to -30 when we were up at the cottage.  I was woken up in the night by the sounds of the cottage cracking and shifting in the cold.  Man is that unnerving.  Of course I had to get up at 3AM and google what causes it.  Well I was relieved to find out that it’s perfectly natural when there is an extreme drop in temperature.  Here’s a good explanation for it.  Some people have even reported to police that they heard gun shots or someone trying to break into their homes so at least my imagination didn’t take it that far.  But still, I didn’t get much sleep for the rest of the night having unrealistic visions of the roof caving in on us.

So if you can’t beat it, join it right?  Might as well work with those freezing temperatures and create something cool out of it – did you get my pun?  We tried these beauties one year. I don’t even know what you would call them – sun catcher maybe?  We picked up bits of flora as we went for a walk, laid them out in a pleasing pattern on a plastic lid and then covered with water and set it out to freeze.

We also brought balloons, filled them with water, added food colouring and set out over night.  In the morning we peeled the balloon off and were left with a hollowed out globe of ice.  We set them down on top of LED votive candles and voila, we had snow lanterns.  They actually looked like giant marbles.  Hey, the nights are really long so you have to keep yourself busy somehow.

Let me know what winter cottage activities you enjoy at your cottage by commenting below.

Filed Under: Cottage activities
The last days of autumn at the cottage